Apple does it, Samsung even longer, Google now has a pair too – obviously, Amazon doesn’t want to be left behind and proudly presents the Echo Buds.

Like all other modern major corps, Amazon also implements its signature feature in the earbuds and so Alexa is not only in your pocket, but also in your ears. There it does not really bother, because with 8g per side it’s close to size zero but does not impress with an exceptional exterior. But enables hands-free operation, albeit a little sluggish.

In addition, you can have the corresponding app automatically check the fit, which is also the only innovation. The pass-through function appears almost as standard with which the intensity of the ambient noise can be freely set in the hearables.

Amazon has brought Bose on board as a partner and so the Echo Buds can come up with an excellent noise canceling function that hides the environmental sound like a charm.
The sound itself is generally a bit bass-heavy, but can be adjusted using the EQ function in the app. The freely configurable operation with double tap and touch’n hold can also be found there.

The triple recharge with the charging case, like the 5 hours of use without charging, can best be described as solid average. IPX4 splash protection and good connection stability are located in the same category and keep you safe if you accidentally move away from your smartphone. In addition to the rather low-highlight features of the Echo Buds, there is also one real careless point of criticism. Recharging the case, means you need an outdated micro USB cable. Looks like Amazon wanted to come to the market quite quickly. Maybe they had the price in mind, which is actually very fair at USD 130.

In general, there is little in the Echo Buds from Amazon that you do not already know from other Hearables, but the implementation is typical for Amazon, qualitatively solid and yet not ultra pricy.

A clear pro is the noise canceling function, which thanks to Bose genes, tackles reliably and hides the environmental noise almost without a trace. The independent test of whether the InEars are properly seated is undoubtedly innovative, but afterwards it becomes difficult to find things that really stand out. Alexa as an assistance system could just as well be called Siri or John, it primarily enables hands-free use of the connected app and its features.
The battery of the Echo Buds with 5h is just as fair average as the charging case with 3 recharges and thus a total battery life of 20h.

By default, a charge of the hearables lasts for 5h, the use of noise canceling only reduces the useful life by minutes. The charging case provides a full three recharges and reliably brings the Echo Buds through the day before everything is charged overnight.

Reliable, high quality noise canceling thanks to the Bose chip. It’s possible to recognize speech patterns and specifically exclude them from noise canceling. Ambient noise can progressive be mixed into the silence.

Automatic check for the correct fit of the Echo Buds or whether the user has selected the right ear tip. This ensures the best possible sound.

Seamless integration of the assistance system with all connected services such as Spotify, Philips Hue or Amazon Music can be controlled without having to take the smartphone out of your pocket.

IPX4 splash protection, very good signal strength even through walls, EQ for sound improvement in the app – no innovative features but you won’t regret them.

At $ 130 the price is fair and you get a technically and high quality product. The Amazon Echo Buds can only be purchased from amazon.com in the US. 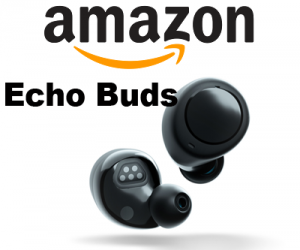 Available at these partners

How long do the Echo Buds batteries last?

Echo Buds are available at Amazon US. The price of 130 USD is fair and gives an excellent price-performance ratio.

What are the Echo Buds TOP-features?

The top notch feature is the Bose active noise canceling system. Another one is the full Alexa integration and the wear test is more then just a nice to have .

Should I buy Echo Buds as workout buddy?

They are IPX4 waterproof but there are no additional sport features like a heartrate monitor. The rock solid fit makes it suitable for running.